Published by Jean-Charles Cabelguen , 11th May 2022

In a previous post, we told you about the great potential of machine learning for solving differential equations. We also wrote about bringing these ideas into the quantum realm with our differentiable quantum circuits (DQC). Then, we discussed how DQC could reach its full potential by running on PASQAL’s neutral-atom quantum processors. Now, it is time to apply these ideas to real problems. This is the first of a series of posts on use cases where we see a potential path towards quantum advantage.

This first post deals with the physics of metal support beams used for construction. This might seem a prosaic question, but it is a topic with a venerable history. The mathematics of beams has been a subject of contemplation for some of history’s most remarkable thinkers. Even Leonardo da Vinci had a crack at it. However, it took another century to develop a predictive theory. The theory was put together only in the 18th century by Leonhard Euler and Daniel Bernoulli, and it is phrased in the language of differential equations — one of our favorite mathematical objects. Despite major simplifying assumptions, the Euler-Bernoulli equations are incredibly powerful. You can still see the first large-scale application of this framework in Paris’ iconic Eiffel tower.

There are some cases, however, where we need to go beyond the Euler-Bernoulli framework. For example, when the beam’s aspect ratio is low or the material is prone to shear deformation. The latter occurs for sandwich and laminate beams with a softcore layer. Such cases require using the more modern and complex Timoshenko–Ehrenfest equations, which we proceed to solve.

Now, let’s get to the problem at hand. Consider a beam with one end clamped to a wall and the other free; this case is known as a cantilever. Cantilevers are widely used in industry to construct buildings, bridges, planes, or even form integral parts of microscopes and other research equipment. As we increase the length of the beam, it will start bending downwards until it gives in. Although this question can be solved using classical methods, it is a perfect setup to demonstrate the power of our quantum solvers and how close we are to solving industrial problems.

We can tackle this problem using the DQC algorithm on PASQAL’s hardware type with just four qubits and a hardware-efficient depth of two quantum circuits.

Standard finite-element methods solve the Timoshenko–Ehrenfest for a specific length. For example, if one wishes to extend the cantilever’s length, then the solver must be started by scratch. Running our DQC algorithm, we closely match finite-element results for any given length. This is already remarkable, but there is more. With our approach we can simply train the DQC at several different lengths and the solver is then able to infer the solutions for all the intermediate lengths (see the video). 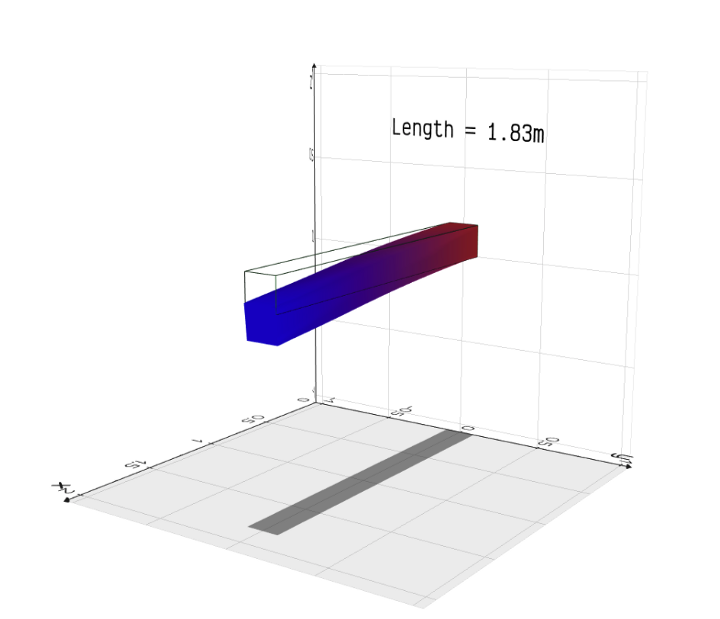 The deflection of a cantilever beam under its own weight, calculated using DQC

This ability to explore parameter space efficiently will be critical for many industrial applications. It will pave the way for truly dynamical digital twins that can help our customers boost their research and development efforts. We have several more use cases we want to share with you. Stay tuned!

The editors of this blog are Evan Philip, Mario Dagrada, and Vincent Elfving.