Storing light in a cloud of atoms

Published by Henrique Silvério, 31st May 2021

Pasqal is building quantum computers made of arrays of hundreds of atoms controlled and addressed by laser beams. Controlling with more precision the interaction between individual photons and the atomic media is crucial to realizing the promises of quantum information processing for computing and communications. In a recent work by Institut d’Optique / CNRS and startup Pasqal, researchers have demonstrated in a proof-of-principle experiment the storage and release of light excitations in a dense atomic cloud using an effect called subradiance. When many atoms are separated by a distance smaller than the emission wavelength, cooperative effects prevent them from decaying to the ground state and photon emission becomes highly suppressed, leading to very long excitation lifetimes.

To study this physical effect, researchers have recorded the intensity of the light radiated by a cloud of rubidium atoms, after a laser excitation. Due to their long lifetimes, subradiant excitations outlive other states and therefore dominate emission at late times. The researchers have also demonstrated that they can turn off subradiance with another laser pulse. 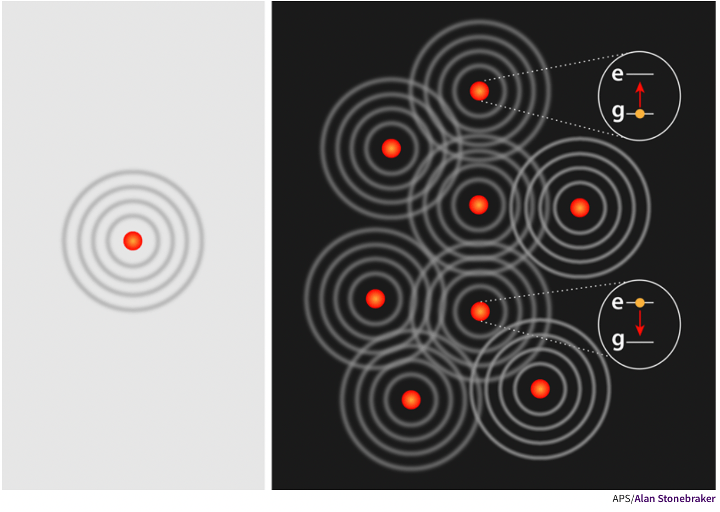 (Left) An atom in an excited state eventually—unavoidably—decays to its ground state, releasing a photon. (Right) In a collection of excited atoms separated by less than the transition wavelength, destructive interference in their photon emission prevents their collective decay from the excited state (e) to the ground state (g). Source: APS Physics

Such an ability to control the collective optical response of atoms in real time has many implications, the most promising one being to improve the fidelity of quantum memories for individual photons. The realization of robust quantum memories is a critical milestone in the development of efficient quantum computing, allowing for faster and more reliable encoding of qubits.

Loïc Henriet, head of Quantum Software and Applications at Pasqal: “Cooperative effects in light-matter systems are very promising for many applications in quantum technologies. The results obtained in this proof-of-concept experiment are really encouraging and will serve as a solid foundation for future technological developments at Pasqal.”

Igor Ferrier-Barbut, CNRS researcher working at Institut d’Optique / CNRS: “We have shown that neutral atoms constitute a viable platform for the controlled storage and release of photons. This paves the way to coherent, quantum communication between quantum computers.”

The study is published in Physical Review X (see also: “Finding Light in Dark Atomic Clouds” in Physics Viewpoint and  “Clouds of atoms trap light in a way that could store quantum data” in New Scientist).

The “Quantum Optics – Atoms” group, led by Antoine Browaeys, is part of the Laboratoire Charles Fabry at Institut d’Optique. Their research focuses on experimental studies of the effects of strong dipole-dipole interactions in strongly correlated systems of a few atoms. Antoine Browaeys is also a co-founder and scientific advisor at Pasqal.

Pasqal is building quantum processors out of neutral atoms ordered in large 2D and 3D arrays. Pasqal’s purpose is to bring practical quantum advantage to its customers, in particular in the fields of quantum simulation and optimization.